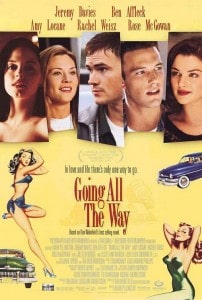 Going All The Way

“Mark Pellington’s adaptation of Dan Wakefield’s novel about a young man coming of age during the 1950’s is a great example of the aesthetic imagination that independent filmmaking may elicit from innovative artists and storytellers.”
—Geoffrey Gilmore, Sundance Film Festival

“Mark Pellington, one of the primary architects of the so-called “MTV look,” takes a retro-route for his first feature, “Going All The Way,” an adaptation of Dan Wakefield’s bestseller that Kurt Vonnegut called “the Midwestern ‘Catcher In The Rye.'” In 1950s Indiana, two young men return from the Korean War. Jeremy Davies plays Sonny, a geek boy in full bloom. He meets up with Gunner (Ben Affleck), an alpha male with a perpetual hard-on. 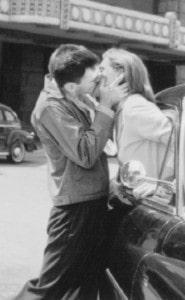 “Together, they spread their hormones far and wide. Targets include Amy Locane (“Melrose Place,” “Carried Away”), Rachel Weisz (“Stealing Beauty”) and Rose McGowan (“Scream,” “Nowhere”). But underneath all the fun and games lies coming-of-age terror, the film’s real subject.

“Though Pellington creates authentic local color and detail, the performance of Jeremy Davies as the Salingeresque antihero is so thoroughly modern—not to mention fabulous—it paradoxically derails the possibility for a true period piece. But with a performance this intense, you might not even notice. (1 hour, 50 minutes)”
—Chris Chang, Cinemania Online

Purchase Going All The Way on DVD from Amazon.com 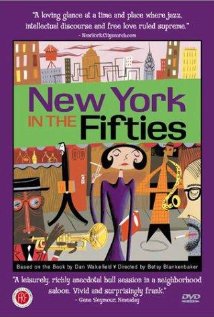 New York in the Fifties

The film “New York in the Fifties” is a 60 minute documentary based on Dan Wakefield’s book of the same name. The film was shot on location in Greenwich village in New York City and in Sundance, Utah in 1998.

The film is produced by Betsy Blankenbaker and Dorka Keehn. For additional information, you can contact Betsy through her website at betsyblankenbaker.com.

Purchase New York In The Fifties on DVD from Amazon.com