Dan Wakefield is a novelist, journalist and screenwriter 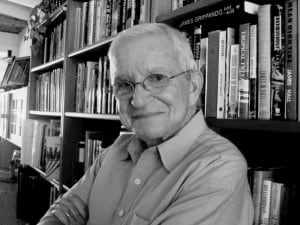 whose best-selling novels “Going All The Way” and “Starting Over” were produced as feature films, and he created the NBC prime time TV series “James at 15.” A documentary film has been produced of his memoir “New York in the Fifties.”

His non-fiction books on spirituality include “Returning: A Spiritual Journey;” “Creating from The Spirit;” “The Story of Your Life: Writing a Spiritual Autobiography,” “Expect a Miracle,” and “How Do We Know When It’s God ?: A Spiritual Memoir.”

Wakefield has been the recipient of a Neiman Fellowship in Journalism, the Bernard DeVoto Fellowship to the Bread Loaf Writers Conference, a Rockefeller Grant for Creative Writing, and an award from the National Endowment for the Arts. He has taught in the writing programs at Boston University, the University of Massachusetts at Boston, Emerson College, The Iowa Writers Workshop, and is presently Writer in Residence at Florida International University in Miami.

Born in Indianapolis, Indiana, Wakefield was an Eagle Scout, and began his writing career as a columnist of his high school newspaper, The Shortridge Daily Echo, also serving as sports correspondent for The Indianapolis Star. After graduating from Columbia College in New York City in 1955, he wrote for many national magazines (including The New York Times Magazine, Harpers, The Atlantic Monthly) and published his first book, “Island in the City: The World of Spanish Harlem.” (Other non-fiction books include “The Addict: an Anthology,” “All Her Children: The Making of a Soap Opera,” and “Supernation at Peace and War,” which first appearred as the entire issue of The March, 1968 Atlantic Monthly.) He has been a staff writer for The Nation Magazine, a Contributing Editor of The Atlantic Monthly, a Contributing Writer for GQ, a Contributing Editor of The Yoga Journal,and is on the advisory board of Image: A Journal of The Arts and Religion.

Mr. Wakefield was baptized as a child at the First Presbyterian Church in Indianapolis, and at age nine attended a Baptist Bible School class that led him to choose baptism by full immersion at the age of eleven. During college he became an atheist, and did not return to church until 1980 when he went to a Christmas Eve service at King’s Chapel, a Christian church in the Unitarian-Universalist denomination in Boston. He joined that church, served on its vestry and as co-chair of its adult religious education committee, and served on the national board of the Unitarian-Universalist Christian Fellowship.

The author and teacher has led his workshops in “Spiritual Autobiography” and “Creating fromn the Spirit” at churches, synagogues, and adult education centers throughout the U.S. and in Mexico and Northern Ireland, and at Sing Sing prison, including the following: Auburn Theological Seminary and Marble Collegiate Church in New York City, The Fourth Presbyterian Church in Chicago, Temple Emanu-El in San Francisco, The Society of St. John the Evangalist (Episcopal) Monastery in Cambridge, Mass., Trinity Episcopal Church and King’s Chapel in Boston, Glastonbury Abbey Benedictine Monastery in Himgham, Mass., St. Gregory’s Episcoapl Church in San Francisco, the Faith Methodist Church in St. Paul, Minnesota, Trinity Presbyterian Church in Atlanta, Georgia.

See more of Dan’s videos on his Youtube Channel

As well as the workshops he leads (see Workshops in “Spiritual Autobiography and “Creating from the Spirit” on this website), Wakefield has taught courses in memoir, fiction, and creative non-fiction at writing programs in colleges and universities throughout the U.S., including Emerson College in Boston, The Iowa Writers Workshop. The Boston University Graduate Writing Program, The University of Massachusetts at Boston, The Illinois University Journalism School, Florida International University, and The Converse (S.C.) Low Residency MFA in Writing Program. Wakefield served as writer in Residence from 1994-2010 at The Writing Program of Florida International University, where he was given The Faculty Award for Mentorship. He now teacher in The Low Residency MFA in Writing Program at Converse College in Spartanburg, S.C.

Creator of NBC TV Series “James at 15.” Story Consultant for series, 1977
Writer and Co-producer of CBS Movie of the Week “The Seduction of Miss Leona,” starring Lynn Redgrave and Bryan Dennehy, based on the novel “Bliss” by Elizabeth Gundy, 1980
“Starting Over,” based on my novel, starring Jill Clayburgh, Burt Reynolds, and Candace Bergen, 1980
Writer of screenplay of “Going All the Way,” based on my novel, starring Jill Clayburgh, Leslie Ann Warren, Ben Affleck, and Jeremy Navies.