By Dan Wakefield on December 5, 2016 in Uncategorized

One night last January while sitting comfortably at the Red Key Tavern (where I always feel comfortable), awaiting my burger and glass of red, Michael Therwechter, the resident photographer and creator of the Red Key website (RedKeyTavern.com), approached me with an idea.

“I was talking to Jim [Settle, the owner] and told him, ‘Since Monday nights are always slow, why don’t we have Dan come in and talk one Monday night a month? We’ll call it ‘Writers Night.’”

Without missing a beat, I said, “No, if we call it ‘Writers Night,’ people will expect me to read their writing.” In the next beat, as if I already had a counter-proposal stored away, I said, “Let’s call it “Uncle Dan’s Story Hour.”

Michael had the ideal response: “Great!”

I’ve been telling stories to friends, new acquaintances and book clubs that meet at the Red Key since I moved back to Indy in 2011, and sometimes people ask for a particular story I’d told to someone else: “Tell us about your dinners with Mia Farrow” or “Tell about the time you worked as a shepherd in The Negev Desert in Israel” or “Tell how you bonded with Kurt Vonnegut because both of you were failed high school athletes.”

One advantage of living to be 84 is you have several lifetimes of stories to tell. As a natural-born ham, I love to entertain, and storytelling comes naturally. My next thought for “Uncle Dan’s Story Hour” was that it needed music. As if I had already thought of that too, the next thing that popped out of my mouth was, “I want to have Sophie Faught play the saxophone.” 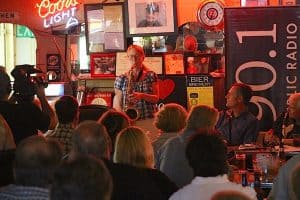 Sophie is one of the best and most popular jazz musicians in Indy, having played on Wednesday nights at the Chatterbox on Mass Ave. for many years. Last year, she was honored by The Star as one of the city’s up and coming young artists, and when she held a party for a new record at IndyReadsBooks a year ago, she drew the biggest audience the store has ever seen.

Even with Sophie’s music, I also knew I needed a sidekick, a sharp guy to prompt and keep me rolling. The answer to this was obvious: who else but The Star’s Will Higgins? We met in 1989 when I came to town to publicize a new paperback edition of my novel “Going All The Way,” and after doing an interview for the now defunct New Times, Will conceived and conducted “The Going All The Way Bus Tour,” which took a busload of people to some of the sites of the story (Crown Hill, The Meridian Hills Country Club and of course the Red Key Tavern.)

My old Shortridge friend and former Village roommate Ted Steeg, the inspiration for the character “Gunner” in the novel, came down from New York to help me out. We passed a mic back and forth on the bus and tossed stories around along the way.

A year ago, Will suggested we revive the bus tour, but I wondered if it would work without Ted who had gone all the way (in the final version) two years ago. Ted and I used to recite with a bottle of red wine as we sat by his fireside, “I’ll meet him later on, at the place where he has gone. . . .”

Will suggested I ask friends to read brief passages from the book as comment on the sites. Travis diNicola, Judy O’Bannon and Karen Kovacik headed the cast with Will as emcee, and I supplied supplemental stories as I careened back and forth at the front of the bus, holding the mic and trying not to fall into the lap of the driver.

When I asked Will if he’d be my co-host for “Uncle Dan’s Story Hour,” he got the 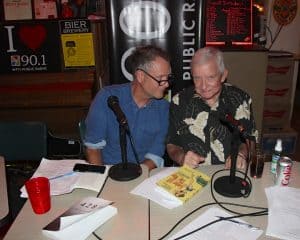 picture at once: “I’ll be the Ed McMahon to your Johnny,” he said, “or Arthur Treacher to your Merv Griffin.”

Originally this was conceived simply as an evening at the Red Key, but once the pieces started falling into place, we thought as long as we’re doing this, why not see if we can do it on the radio? I’d been interviewed on WFYI’s masterful production of their documentary on Vonnegut (“A Writer’s Roots: Kurt Vonnegut’s Indianapolis”) and started by asking that producer who put me in touch with the head of programming.

Will and I pitched the exec at a meeting at (of course) the Red Key. The program buy ventolin inhaler asda exec asked me to write up a one-page summary of the show that he could give to his Board, and after a nail-biting few weeks, he said he was turning us over to the person in charge of radio. She gave us the go-ahead for our first show and put us in touch with the sound engineer we would need to employ for the job.

As pieces began to fall into place, it turned out that Michael, the Red Key photographer whose idea set the whole thing in motion, was a natural-born producer. He announced the show on the Red Key website with a fee of $15 per person, and within hours, the place was sold out. Mike wrote and recorded a terrific intro to the show as well as promos aired on WFYI. He brought in the sound engineer to scope out the logistics for recording. He worked with owner Settle (son of the legendary Russ) to organize closing the bar (a first in its history) to all but participants and show-goers from 6-8 p.m. on Monday night, September 19. He arranged to have drinks and burgers served to the 50-plus people at the 15-minute break and during the show without any interruption in the broadcast.

I almost had a cow. “Serve burgers and drinks to 50 people during the broadcast? Without any interruption in the program? That’s impossible!” I ranted. But with the organizational aid of the indomitable lawyer-organizer Pat Chastain and the all-star staff of the Red Key, including Jim behind the bar, Violet at the door and Lana on the burger-magic grill, Mike made it all happen.

For my own all-star broadcast team, I booked my favorite Indiana writer, Susan Neville, to read a poetic piece from her classic “Indiana Winter” as the wind-up to Sophie closing with “I’ll Be Seeing You.” That first show told the story of the local tempest tossed by “Going All The Way” and a recording of Kurt Vonnegut reading the part of his review of the novel in Life magazine: “Having written this book, Dan Wakefield will never be able to go back to Indianapolis. He will have to watch the 500-mile race on television.” 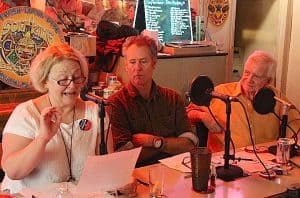 As guests, we had Ophelia Roop, the adult services programmer at the Central Library who assured me it was safe to come back and speak here in public in 1987 (17 years after the novel was published); Georgia Buchanan, the first movie and TV critic of The Indianapolis News who spoke of the trauma of having to transfer from Manual to Shortridge after her sophomore year; and Janet Brucker Herke, my 1950 Shortridge classmate who explained the arcane social structure of high school life in Indy. The show aired on WFYI on October 16 and can be accessed on my website, danwakefield.com.

We recorded a second show on September 19 on reporting from dangerous places with my own account of writing in Israel and Jordan in 1956 when I was detained by The Arab Legion as a suspected spy but allowed to return to what the Arabs call “Occupied Territory” (better known as Israel). Middle East reporting was brought up to date by Will Higgins who The Star sent to Iraq and Bloomington author/foreign correspondent Douglas Wissing who has written two books based on his tours embedded in Afghanistan. That show has not yet aired at the time of this writing. After our first show, I wrote up ideas for an additional six shows, and WFYI called us in to express their enthusiasm and tell us they wanted to find sponsors for the “Uncle Dan’s Story Hour.” Stay tuned. . . .

Whatever happens, that first hour show was like my own “This is your life,” featuring some of my favorite people –my favorite writer, musician, librarian, classmate, survivor of Indy high school trauma and Star reporter. And for extra good measure, the voice of Vonnegut, the Godfather of my writing career. As a special feature, the recording of a pop song from the days of my “Going All The Way” tempest was played, which begins with sirens: “Indiana wants me, and I can’t go back there. . . .” But I finally did, and I’m glad. “Uncle Dan’s Story Hour” is my testament.

Dan Wakefield’s five novels are now available as eBooks as well as his memoir, “New York in the Fifties.”

Vonnegut Lives!
A Memory of The Emmett Till Murder Trial

4 Responses to The Story of “Uncle Dan’s Story Hour”