By Dan Wakefield on June 30, 2015 in Uncategorized 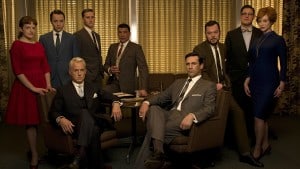 When the opening music to the last episode of Mad Men sounded there were tears in my eyes. It wasn’t just the loss of my favorite TV show, but the years I had faithfully followed it since I watched the first one, seven seasons (and eight years) ago, that I saw had slipped away, so fast, as all time passes so much more swiftly the longer we live. When Peggy Olson took her seat as a lowly secretary at the ad agency, I was in Miami, a mere kid of 75, with no idea that I would ever leave and move back to my old hometown of Indianapolis (unexpectedly with a new mitro-valve from a pig!)

For the past year or so, my fellow avid fans of Mad Men debated how the series – and Don Draper, its main man – would end. There was much speculation, inspired by the falling body in the opening credits, that Don would leap from the window of a Manhattan skyscraper. When the opening show of the final two-part season showed Draper downing more drinks (he has already had enough to dispose of his liver) and watching models slink in furs as they posed for his approval, I had a new theory. I foresaw that his (and the show’s) last scene would be a church basement with men and women drinking black coffee out of Styrofoam cups and chain-smoking , as the camera zoomed in on Draper’s face and he spoke the last line of the legendary series: “Hi, I’m Don. I’m an alcoholic.”

I stole that idea from the last line of a terrific mystery novel called Eight Million Ways to Die by Lawrence Block, and it was spoken by the private eye of his own series hero, “Matt Scudder,” who’d been struggling with booze like Don Draper. I had the good fortune of meeting Lawrence Block in New York a few years ago, and found he was a Mad Men fan, so I emailed him my prediction for Draper’s end. He responded that his own prediction was that Don would “jump out the window, echoing the falling image from the opening credits.”

Both of us were wrong – and probably millions of others were wrong, too, seduced by the “falling image” that was like an emblem of the show. And Don seemed to be careening toward that very end in the last episode, but he ended up – as he had once before when in need of renewal – in California. Sick and hung over, he crashed on the couch of an old friend whose daughter was on the way to a self-help retreat up the coast in an Esalen-like setting, and she dragged Don along with her.

An early-seventies style hippie self-help retreat was was the last stop in the world I could imagine for the hard-drinking, sharply cynical Don. Oh no, I thought, fearing they might try to convert him to some kind of pop guru, opening a meditation firm on Madison Avenue. I should not have worried. As people talked about the need for love and connection, and a man told of his feeling of never having been seen or heard or appreciated, Draper spontaneously goes and hugs this stranger. The next day he wakes up and, as Jon Hamm, the actor who made “Don Draper” real and unforgettable, explained his take on it in an interview in The New York Times:

“. . .the next day, he [Draper] wakes up in this beautiful place, and has this serene moment of understanding, and realizes who he is. And who he is, is an advertising man. And so, this thing comes to him. . .”

“This thing” is the famous coke commercial sung by hundreds of people of all ages, sizes and colors [“the 1971 Coca-Cola ‘Hilltop commercial”], as they boom out the chorus:  “I’d like to teach the world to sing/in perfect harmony/ I’d like to buy the world a coke/and keep it company/ That’s the real thing. . .”

Matthew Weiner, the creator/genius behind Mad Men, said in an interview with writer A.M. Homes at The New York Public Library, he thought “Why not end the show with the greatest commercial ever made?”  It was the greatest ending of a television series I have ever seen.

* Full disclosure – I led workshops in “Spiritual Autobiography” at Esalen on three occasions in the ‘nineties.
**Further Disclosure: this summer I am leading a workshop in Brown County, Indiana, on “Creating Your Memoir.”  I will sing from a hilltop: “I’d like to teach the world to sing. . .”
(See my Facebook for Details)