My old friend from New York in the Fifties, jazz musician David Amram, has not only played French horn with Dizzy Gillespie, he is a composer of symphonies, chamber music, choral works, a flute concerto for James Galway, the movie score for the first “Manchurian Candidate” and “Splendor in the Grass,” conductor of The Philadelphia Symphony, and author of Offbeat: Creating With Kerouac.

This guy is the original “Energizer Bunny.” He never runs down. I pride myself on being pretty productive at eighty-five, but Amram is two years older, and I’ll never catch up. Compared to him I feel like Grandma Moses. He still seems to have the energy he ran on in 1956 when he began collaborating with Kerouac, combining jazz and poetry at coffeehouses and bars around The Village. This was an era long before the internet, when “storytelling was still practiced as a people-to-people activity,” and Amram says proudly he was “a prize student at the University of Hang-out-ology. “ (An alternative lifestyle to the I Pad, Snapchat and Instagram.)

David met Jack at some of the BYOB (“Bring Your Own Bottle”) parties in The Village, and their jazz-poetry sessions led to their collaboration, with Alan Ginsberg, of a Beat Home Movie with the title of Ginsberg’s poem “Pull My Daisy.” The making of the film was a collaboration with their circle of friends, including poets Gregory Corso, Peter Orlovsky and Ginsberg, and painters Larry Rivers and Alice Neal, and it’s the main story told in this up-Beat book. David wrote the music, Jack did a beautiful spontaneous narration of the friends acting out an improvisation of their lives, and David wrote the music and appeared on film. When it was finished, David told Jack that “our last three weeks [of filming and partying] were like the famous painting by Hieronomus Bosch, Descent into the Mouth of Hell.” He later added, with humungous understatement, ”it’s never going to look like Lassie Come Home or Gone With the Wind.”

And if you’re not entranced by the often stoned-out antics of the Beats at play, be careful to look and listen to Amram’s story, for there are diamonds of art here like the diamonds that Kerouac found when he looked closely at the sidewalks of New York.(My old friend Rev. Norman Eddy of The East Harlem Protestant Parish, saw those diamonds as he walked the sidewalks of Spanish Harlem. You can see them too, if you really look.)

Some of Amram’s talks with the jazz musicians of New York in the Fifties, reminded me of insights of writers of very different scenes and styles. Kurt Vonnegut (a fan of The Beatles) often told aspiring writers not to write “for the world,” but write as if you’re addressing one person. He said he always wrote as if talking to his beloved sister Alice.

Charlie Mingus, the great bass player who Amram played with at The Five Spot [mecca of jazz in New York in the Fifties] advised David to “Just find one person and play for that person all night long. . .All you need is one person in your whole life to really be listening.”

What a blessing that Amram, with all his great stories and music, is coming to my hometown of Indianapolis to play at The Jazz Kitchen on June 4, and on June 5 will join me on “Uncle Dan’s Story Hour” [already sold out but will be aired later on WFYI] to talk about New York in the Fifties, and play jazz classics of our era. To add to the occasion, he will be joined by our own star saxophone player, Sophie Faught, and her trio. That is the best birthday present I could have for The Big 85.

Tickets for the Amram concert at the Jazz Kitchen on June 4 are available here. 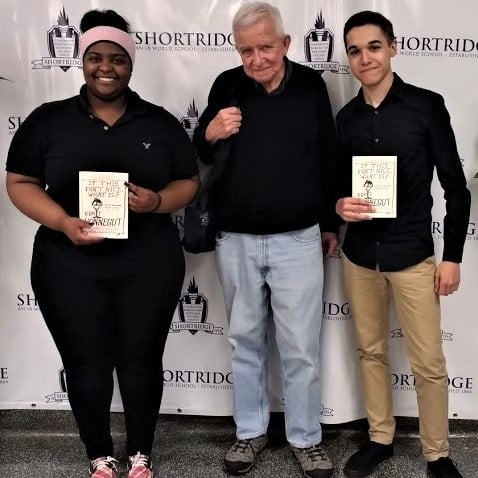 I am proud to honor Arrine McCaw and Andrew Gomes, the winners of the annual Vonnegut Writing Prize of $1,000 at Shortridge High School, donated by the children of Kurt Vonnegut. Ms. McCaw plans to go to The University of Southern Indiana, while Mr. Gomes is on his way to Purdue

I was happy to give each of them a copy of If This Isn’t Nice, What Is?: Vonnegut’s Graduation Speeches and Other Words to Live By.

Kurt Vonnegut was always proud of being a Shortridge grad, and so am I.
When I first met Kurt in 1963, people asked me afterwards “Did you talk about writing?”
“No,” I said “We talked about Shrotridge!”

"A precise and moving recreation of a time and a place when the world seemed small and we knew everyone in it."