Kurt Vonnegut was a Humanist, but he always spoke of people he loved as being “up in heaven now.” He included in that territory his wife Jane as well as Sam Lawrence, the publisher who he said had saved him “from smithereens.”

That same publisher, with a generous boost from Kurt, saved me from smithereens. In fact, Kurt is still saving me from smithereens, providing me work in collecting, editing and writing introductions to his letters, his graduation speeches and now a book of his complete short stories, so I choose to believe that Kurt “is up in heaven now.” I figure he has a townhouse over in the Humanist neighborhood, just east of the pearly gates.

From another viewpoint, it seems he is still alive, not only through his books (they are all still in print) but also through the work of The Vonnegut Museum and Library (VM&L) here in Indianapolis. You have to understand that this particular institution is much more than its name suggests – it does a lot more than just house his books and artifacts like his old typewriter and decorate the walls with his quotes (such as “Man is a dancing animal.”). It carries on the work he believed in.

Kurt was always a crusader for the freedom of expression, and he fought against the banning of books. He would be proud to know that the museum and library that bears his name features a “Banned Books Week” every year when authors and book lovers come and read passages from books that individuals and institutions have tried to ban. People who come to listen are enlightened and often shocked and appalled to hear what silly reasons are given for trying to keep adults, children and students of all ages from reading books that are so powerful and beautiful that fearful people have tried to ban them.

The School Board of Drake, North Dakota, not only tried to ban Vonnegut’s “Slaughterhouse-Five,” a worldwide bestseller, they actually burned copies of it in the high school furnace. Kurt wrote an eloquent letter to the Chairman of the Drake School Board, in which he said:

…If you were to bother to read my books, you would learn that they are not sexy and do not argue in favor of wildness of any kind. They beg that people be kinder and more responsible than they often are. It is true that some of the characters speak coarsely. That’s because people speak coarsely in real life. Especially soldiers and hard-working men speak coarsely, and even our most sheltered children know that. And we all know, too, that those words really don’t damage children much. They didn’t damage us when we were young. It was evil deeds and lying that hurt us.

Once when I went to a reading at Banned Books Week, I heard an eloquent reading by Judy O’Bannon from the wise, lovely novel, “To Kill a Mockingbird.” The “excuse” for banning it? A character used the word “hell.” If you go to The VM&L during Banned Books Week, you are liable to learn something that will shock your socks off.

One day I went to hear Liza Newman, the granddaughter of the labor activist Powers Hapgood of Indianapolis, who I’d read about in Vonnegut’s novel “Jailbird.” I happened to get there early, and a panel discussion was going on with four Japanese-American citizens who had been in the U.S. internment camps during World War II because they were of Japanese ancestry. I found their experience so depressingly fascinating that I later looked them up and interviewed them for an article I wrote in NUVO about that dark chapter in our history.

Oh and the talk about Powers Hapgood – one of Kurt’s heroes – was terrific too, so I got double my money’s worth (but I hadn’t spent a cent – all the programs at The VM&L are free except for dinners and fundraising events). There’s a Vonnegut Book Club, and that’s free too. They meet once a month to discuss a book they’ve chosen to read, and it may be one of Vonnegut’s books, or it may be a book by another author. If the books are by other authors from Indiana, sometimes the author comes and takes part in the discussion. 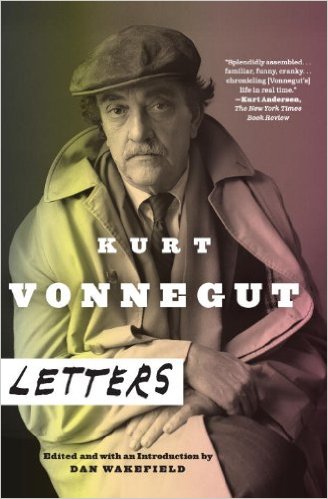 Once I went to hear James Alexander Thom who lives in the woods outside of Bloomington with his lovely wife Dark Rain; they met while he was researching his novel based on the life of Tecumseh, “Panther in the Sky.” The day I went to hear him at The Vonnegut Library, the book club was discussing his new novel “Fire in the Water,” which is set just at the end of The Civil War when Lincoln was assassinated. Once I went to talk and answer questions about a novel of mine, “Under The Apple Tree,” which takes place on “The Home Front” during World War II.

Kurt was a Corporal in the infantry during World War II (he liked to say he had attained the same rank as Napoleon). He was captured by the Germans during The Battle of The Bulge and survived the firebombing of Dresden as a prisoner of war in an underground meat locker, a nightmare he transformed 20 years later into his classic novel “Slaughterhouse-Five.”

Kurt was loyal and supportive of his fellow veterans, and he’d be proud to know that the museum-library honoring his name brings in thought-provoking speakers and programs the weekend of every Veterans Day. Last year, I heard the Afghanistan war veteran Luis Carlos Montalvan, author of “Until Tuesday: A Wounded Warrior and The Golden Retriever Who Saved Him.” Captain Montalvan came with his dog “Tuesday” and told how service dogs were making a new life possible for veterans who had suffered the physical and emotional wounds of combat. With his faithful Golden Retriever at his feet, Montalvan explained that “service dogs” are not just for blind people but are essential to some of the wounded vets who suffer from PTSD.

Tim O’Brien, the Vietnam vet who wrote the most acclaimed book of that war, “The Things They Carried,” was a featured speaker at The VM&L Veterans weekend several years ago, and he gave one of the most impassioned anti-war talks I have ever heard (along with Kurt’s talk against the first Iraq war that I heard him give at All Souls Unitarian Church in New York City). O’Brien is returning this July to speak at the “Teaching Vonnegut” program that brings in secondary school and college teachers from around the state and the country who use his work in their courses.

Kurt’s short stories are especially popular with high school students. I learned that personally a few years ago when I went to pick up my goddaughter from Miami Senior High School. She was anxious to tell me about a really “cool story” she had read in her Language Arts class that day. She didn’t remember the name of the story, but she said it was about a boy who lived in the future at a time when the government tried to make everyone equal by wearing weights that kept down their particular talents. This one boy defied the rules and refused to wear the weights, and he was the hero of the story. “Was that story called ‘Harrison Bergeron?’” I asked her. “Yes! How did you know?” she said. “I know the guy who wrote it,” I said. “A guy named Vonnegut.”

That course for teachers at The VM&L will introduce other students to the work of “that guy named Vonnegut” whose imaginative stories and novels open up new ways of looking at things, of questioning assumptions and of pointing out “the elephant in the room” that everyone else is embarrassed or afraid to mention. WARNING: His writing is in fact a kind of literary “gateway drug” that makes young people want to read more, discover other authors, maybe even lead to Dostoevsky and the novel Kurt’s wife Jane required him to read on their honeymoon, “The Brothers Karamazov.”

Reading Vonnegut, the odds are you’ll learn something unexpected. It was true of the man as well as his work. In the last 15 years of his life, I was living and teaching in Miami, but at least once a year, I went to New York, and I always looked forward to a lunch with Kurt. I can’t remember a time when he didn’t say something that stuck in my memory.

Once when we were walking back to his house after lunch, he said, out of the blue, “You know, Dan, we never had to leave Indianapolis to be writers because there are people there who are just as smart and just as dumb, just as kind and just as mean, as people anywhere else in the world.” It’s obvious, yes, but I’d never looked at it that way before. Now here I am, living and writing in Indianapolis, and at least several times a week, I hear his voice in my head, saying those words, and I smile.