The first day of grade school was like the dawn of civilization. I walked the half block up Winthrop to School #80 with a sense of excitement and mission that the old explorers must have felt on coming to a newly discovered land. Our smiling first-grade teacher, Mrs. Roxie Lingle Day, made us feel welcome and safe. When the pretty girl with the pigtails, Nancy Downs, cried because she had never been away from home before, Mrs. Day took her into her arms and held her on her lap. In the coming days, the wonders of the world were opened to us – words, pictures, numbers, music. More magic was introduced next door in The Library (housed in the Masonic Hall in those days), where I found my way, in the shelter of stories, to the path I would follow and am following still.

I kept in touch with high school friends throughout the years but lost track of my School #80 pals as I left the neighborhood to go to Shortridge and write for The Daily Echo (I was already prepared by publishing first in The Rippler, the School #80 paper.) I left town for college at Columbia (where I wrote for The Daily Spectator), and life in New York, Boston, Los Angeles, and Miami, circling back here in 2011. I first lived downtown, so it wasn’t till I moved back to my old Broad Ripple neighborhood a few years ago that I found a few of my fellow survivors from the cradle of our beginning – School #80.

Last year I met up with Gene Neudigate again, my basketball-crazed comrade who got his start playing at my backyard backboard on Winthrop, and went on to star at Broad Ripple. We get together now and repeat the same stories of basketball or of School #80, never tiring of telling our stories, over and over, like the beat of the ball being dribbled on the hardwood.

“Guess who I ran into about ten or fifteen years ago?” Gene asked me. (At this age, “ten or fifteen years ago” seems a lot like yesterday.)
“This woman I didn’t recognize,” he continued, “called to me – ‘Gene – Gene Neudigate,’ she said, ‘Don’t you remember me? I spent a lot of time with you!’ ”
“I stared at her, and I said ‘I’m sorry,’ but I still don’t know who you are.
“I’m Mrs. Grimes!’ she said.”
Mrs. Grimes was the Fourth Grade teacher at School #80.
“She did spend a lot of time with me,” Gene said. “In fact, she spent more time with me than any other teacher ever did. She was my favorite teacher.”

Those teachers have remained part of our lives, sometimes even “in person” as well as in memory. Mrs. came to my mother’s funeral. The summer I was a sophomore in college I drove with a friend to California and we stopped in Carmel-by-the-Sea so I could visit my eighth grade teacher, Louise K. Wheeler. She was the first person who said I could write. Thank you, Miss Wheeler. I’m doing it.
*    *    * Maybe getting to know again friends from School #80 confirms my sense of who I am as a man of eighty-three, by reminding me of who I was in the very beginning. (“I was, therefore I am.”)  Gene Neudigate told me he had seen his old grade school class again when Alice Ashby Roettger convened them for lunch at Plump’s Last Shot on the day of their 50th Broad Ripple High School Reunion.  Alice Ashby!  Of course! She played the violin and wrote for The Rippler!

I had run into her a few years before when I went to borrow either a cup of sugar or a bottle of wine from my neighbor Mary Holland, and Alice was just coming out the door with a few others from some neighborhood committee. She stopped on the steps and we started talking about our favorites from The Golden Book of Song, which was practically a textbook at School #80. Alice promised to invite me over some time to talk about our old teachers and belt out a few numbers from The Golden Book, but like most good intentions, it hadn’t come to pass, so a few weeks ago I called Alice and invited myself over. 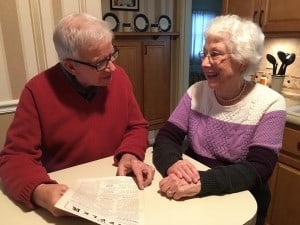 She still has a copy of The Golden Book of Song, and opening it is like opening a box of Proust’s madelines. The names of songs – “The Old Oaken Bucket,” “Merrily We Roll Along,” “Sweet and Low,” “Men of Harlech,” “Columbia, the Gem of the Ocean . . .” bring back scenes of every season of childhood. The deepest memory The Golden Book music evokes for me is a balmy spring afternoon when the classroom windows are open and a soft breeze blesses us all, as we’re gently lifted “On Wings of Song.” I can hear as clear as day the voice of Sandra Anderson singing the soprano solo in “Hiawatha,” the sound bringing with it an essence of spring as true as a green bud just about to burst – as we were too, and didn’t know it.

The music makes teachers materialize – Miss Shute and Mrs. Grimes, Miss Shaw and Miss Wheeler. Both Alice and I remember Miss Louise McCarthy, the teacher who was most un-popular then, and now seems the one who may have taught us the most.

“She made us always write in complete sentences,” Alice remembers, “And to make outlines before we wrote.”
“And she taught us to think,” I say.
Sometimes she shocked us.  In the spring of seventh grade, we were studying American history, and Miss McCarthy was telling us how America took The Philippines. It didn’t seem “fair” or “democratic,” and Miss McCarthy could see we were we unsettled and disturbed by our country’s methods of conquest – and then she really knocked us for a loop.

“Do you think America is always right?” Miss McCarthy asked the class, the very question seeming subversive; and then she wagged her finger at us slowly back and forth and said, “Why, not at all, Seven-Bs, not at all!”

Our minds reeled. This was a new way of looking at things, a perspective we had never seen before. Years later, this revolutionary lesson from Miss McCarthy came to mind when I heard Kurt Vonnegut asked in an interview: “Where did you get your radical ideas?” and Vonnegut answered proudly – and without hesitation – “The Public Schools of Indianapolis.”

Alice was in the first grade when The Japanese bombed Pearl Harbor. As she wrote in “Battle Fields and Playgrounds,” a lovely personal memoir of the era:

“As far as I knew, posters saying ‘Is this trip necessary?’ and charts indicating how many war bonds it took to buy a tank or jeep had always adorned the classroom walls. War stamp sales in the corridors and graphs showing each classroom’s participation in them, periodic air raid drills, and piles of scrap growing the schoolyard were the norm . . . The air raid drills provided not only an opportunity to instruct us in what to do ‘in case of attack,’ but also afforded us a chance to gather as a school to sing patriotic songs to the accompaniment of the upright Steinway that had been pushed into the hall from the nearby gym.

“While we sang inside, a scrap pile began to grow in our schoolyard. I learned that one old tire could provide as much rubber as is used in 12 gas masks, and that an old lawn mower would help make six 3-inch shells.  I rode my scooter to school one day – the tires had worn bare and my parents encouraged me to donate it to the war effort. I hoped to win praise for the ultimate sacrifice, like the junior high boy who donated his entire electric train set. No matter that I had outgrown my ‘scooter days’ and was happy to get rid of the darned thing, battered and scarred as it was.”

Alice remembers making tinfoil balls, collecting milkweed pods to help make parachutes, and eating “Victory Cakes” made without eggs, butter or milk. Like me, she collected paper and scrap metal, and bought “War Stamps.” All this was part of being patriots on “The Home Front,” and School #80 was our fortress, our headquarters, as well as the heart of our learning – our neighborhood cathedral, whose halls seemed hallowed.

Now it’s a condo. Someone is living in my first grade classroom! Nothing is the same in our old neighborhood. The institutions we knew are gone – Gene’s Pure Oil Station, Wally’s Grille, Lobraico’s Drugstore, The White House record store, Vonnegut Hardware . . . The Vogue remains, but like School #80 becoming a condo, the movie house has become a night club. It seems like everything else is a bar. Gene Neudigate’s house – the last one on the north end of the block at 62nd and Winthrop – has just been torn down to make way for the spread of more anonymous condos.

You can best get the feel of what it was like back then from Alice Ashby Roettger’s verse impression:

I pedal alongside the high school football field;
Over the railroad and down the hill,
Past a long-deserted log cabin,
Then turn to speed through an arch of flaming maple trees
And past the brooding hulk of my school.

Reaching the Masonic Hall,
I fling my bike to the ground
And leap up the steps,
All the time sensing the buildings
That flank the street as they stretch north to the canal:

Drug stores and small groceries,
The shoe repair shop, bakery, and deli.
Then, last, the fire station that hugs the very banks of the canal.
And beyond the bridge – the modest dwellings of the canal builders’ progeny.

Entering the Hall – which houses the library –
I sniff the familiar odor of books,
And savor the promise . . .